On the anniversary of his day of birth, 23 March 1936, Galleria Fumagalli pays homage to master Jannis Kounellis sharing the video of the performance Die Hamletmaschine by Heiner Müller with his scene and directed by Theodoros Terzopoulos, held on 28 December 2015 at the Piccolo Teatro d’Europa, Milan.

The project, curated by Annamaria Maggi and Alexandra Papadopoulos, was performed by actress Sophia Hill, the live electronic music by Panagiotis Velianitis and the male voice realised by the director.

Die Hamletmaschine (Hamlet’s machine) is a postmodern drama loosely inspired by William Shakespeare’s Hamlet and characterised by the friction between the poetic word and the story. The protagonist’s monologue is a ranting soliloquy in which are laid bare, on one hand, the abandon of any utopian impulse and, secondly, the paradoxes of the modern intellectual, torn between the inability to change the state of things and the will to turn into a machine at the service of the power. In creating the scene Jannis Kounellis thought of a Hamlet “with his back turned towards the ruins of Europe” for a play that is both personal and social, against corruption and power.

To watch the streaming, write an email to info@galleriafumagalli.com, we will send you the link and password. 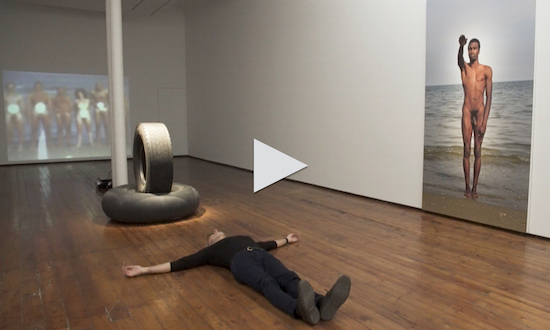